Amy Winehouse plus Janis Joplin Tribute live at The Blvd

UNFORTUNATELY THIS EVENT HAS BEEN CANCELLED 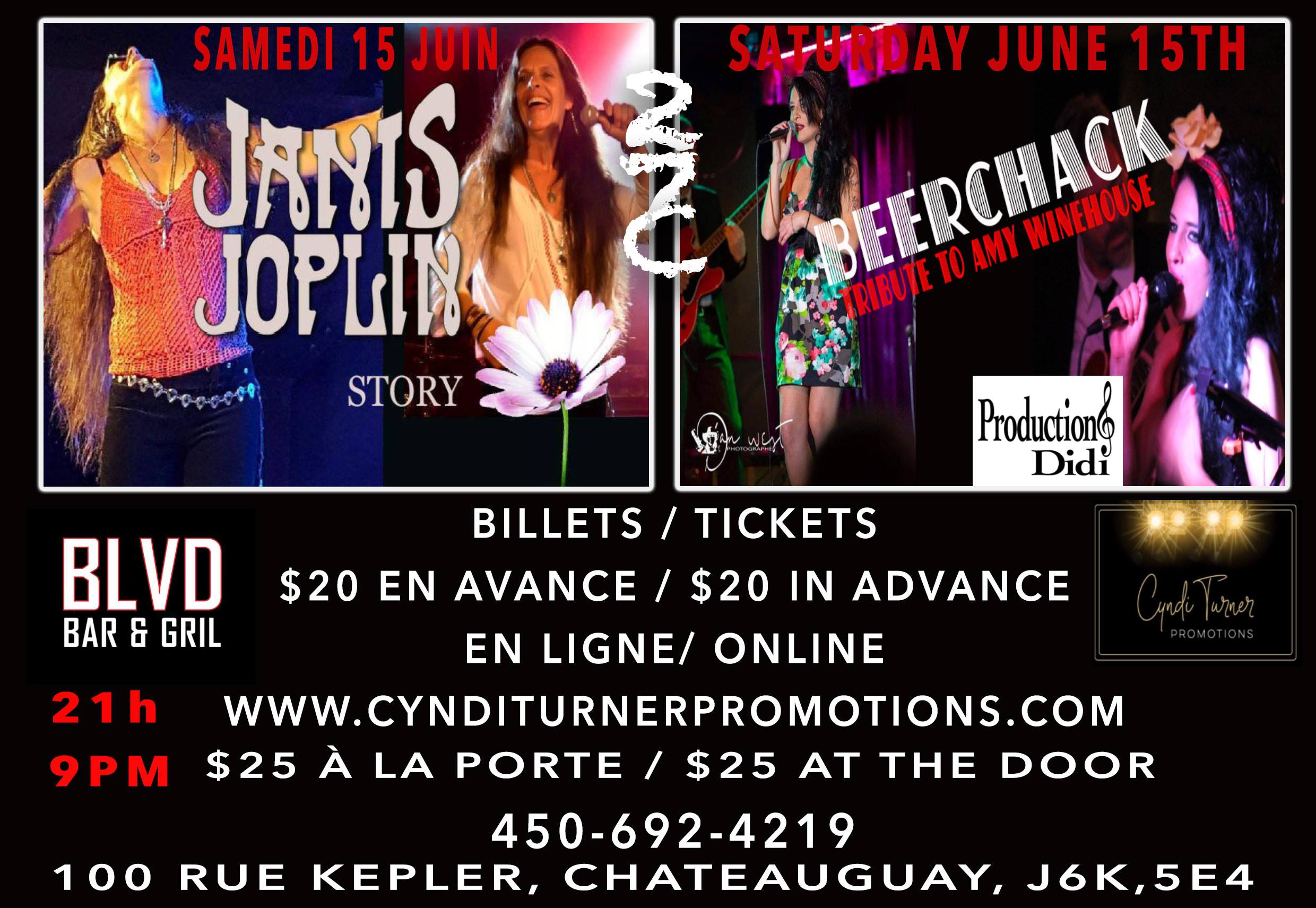 Amy Winehouse, known for her unique voice and often compared to legends Ella Fitzgerald, Dinah Washington, Sarah Vaughan and Wanda Jackson. Her music was a mix of jazz and blues.

Now, we have an amazing tribute to Amy Winehouse by the artist “Beerchack”!

Singer, actress like you’ve never seen, who is outstanding and who interprets Amy Winehouse brilliantly with her musicians and chorus-singer.

With her show, she will make you relive the course taken by Amy over the years and she will also make you discover facets of Amy Winehouse which you may not even be aware of.

It's recording artist Judy Ann’s lead vocal, very often associated to the voice of dynamic Janis Joplin, transferring all that energy straight to the heart.

She received a grant from the onseil des arts et des lettres du u ec for her writing of original songs. After recording her own album, she took part in the recording of many albums for well known and emerging artists and has also worked with Aldo Nova and Sony Music, among others. She then produced her music in major events, with well known musicians, and played on the radios and tv shows not only in France but also in Quebec, Ontario and even in the United States. With her strong and raspy voice, or soft and velvety sound, this artist is big energy performer who’s always ready to share emotions with her fans. She has that soul which only true artists possess. Her voice will bring you to ecstasy! Learn more about her at www.judyann.ca.

Judy Ann surrounds herself with very high quality and renowned musicians. Starting with guitarist George Papafilys, who is also a very high level performer who won the Lys Blues in the Musical Performance category, and also played with many very well known artists over the years, like the band Offenbach, one of the most famous rock band in Quebec. George is also working at writing original songs for future projects.

Bill Timotheatos on bass. With his solid and deep sound he has also been around for many years, backing up many well known artists in different styles of music. Steady and melodic, his bass playing is the guideline to that acid blues high energy sound.

On drums, David Devine is doing his magic and keeping the rythum right on for every member of the band. Him too, a complete musician who has shared the stage with a large number of well known and emerging artists. He was part of many recordings and all kinds of shows. Not only is David a solid performer on drums, he also loves to please his audience it's the hott

est drum solo, yes... the stick are on fire. Seeing is believing !!

The last member to join the band is the keyboardist André Bisson, who is also a long time well known musician the music business. He has shared many shows with well known artists and has also worked at original songs and recordings. More than a talented keyboard player, he is also a master of that famous B3 organ. He also has that warm and strong voice with a very large range. He sings his heart out !